Excel formula to get domain name from URL

February 28, 2013 in Tips and Tricks by David Zimmerman

While doing SEO professionally I am always dealing with long lists of URLs. The best way to manage this is with Excel. Sometimes I need to take a list of URLs and parse them just…

How Social Media is Changing SEO

January 24, 2013 in Portfolio by David Zimmerman

I was invited to speak to Social Media Charlotte (SMCLT) Breakfast on January 24th, 2013 about how social media is changing SEO.

November 1, 2012 in Portfolio by David Zimmerman

On November 1, 2012 I was invited to speak at SEMCLT about the second Google Above-the-fold algorithm update.

Marketing is useless without tracking. That is one of the reasons I like doing online marketing professionally. Unfortunately many developers- even developers working for companies selling marketing services- don’t consider this when building a website.…

Every site needs an .htaccess file. Still, with every website I build I always forget what to put. So I thought it would be a good idea to write up one, simple .htaccess file that… 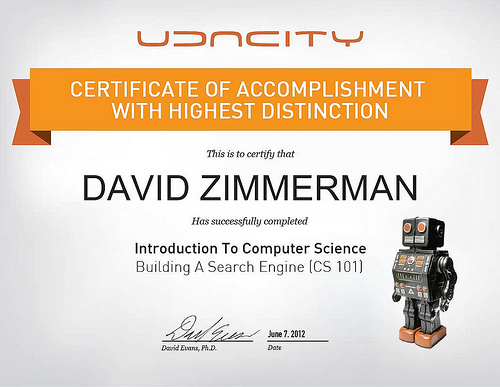 I have recently completed my first Udacity class- CS 101: Building a Search Engine- and received a Certificate of Accomplishment with Highest Distinction.

April 8, 2012 in Tips and Tricks by David Zimmerman

The Google Inside Search blog post from April 3rd turned the SEO world upside-down. Although Google has been telling us about changes they’ve made to the algorithm for a few months now, this one was…

January 17, 2012 in Tips and Tricks by David Zimmerman

Are you looking to find Charlotte, South Carolina? Keep looking because Charlotte is actually in North Carolina. I understand the confusion- many people haven’t been to this part of the country and might make this…

December 30, 2011 in Tips and Tricks by David Zimmerman

Twitter recently stopped providing RSS feeds for all it’s data. You can, however, use FeedTwit to get your Twitter updates as an RSS feed.